"Iron" Mike Wilcox is a main character in Days Gone. He is a survivor of the Freaker outbreak and the leader of the Lost Lake Camp.

Mike was born in 1941 and grew up around Hood River County, Oregon. As a child, he played in the northern caves with his father who fancied himself as a geologist and spent hours explaining how the caves were formed by lava many years ago.

As a young adult, he worked as a forest serviceman for several decades managing the wilderness in the Cascade range, upon where he gathered a distinct knowledge of the area including mercury mining which occurred in the early 1900's.

Mike also met and befriended a young man named Jack, the future President of the Mongrels Motorcycle Club. He once took him fishing.

He later met a woman named Elizabeth where the pair fell in love and eventually married who lived together for 30 years. Together they hiked trails and went mountain climbing. However, Mike never desired to have any children of his own which caused a heavy strain between him and Elizabeth for some time.

In the early months of the apocalypse, Iron Mike was part of Sherman's Camp, which was made up of surviving law enforcement and civilians. Eventually, two factions formed in the camp, creating an increasingly hostile situation within the settlement. A meeting was set up between both sides, as it was believed that everyone had run out of ammunition, but it was quickly discovered that one faction still had ammunition. Everyone killed each other, save for Mike and Nora, who barely escaped the carnage with their lives. This incident deeply scarred Mike, making him to repudiate violence.

Sometime after the Sherman's Camp massacre, Mike formed another group in Lost Lake, which had the goals of pacifism between all survivors in mind, still shaken from the carnage in Sherman's Camp. Among his core members were Skizzo, Rikki Patil, and Addison Walker. Deacon St. John and Boozer eventually joined Mike's camp and helped it greatly. Mike and Deacon became close at this time. However, Deacon's violent way of handling situations led to a falling out between the two, with Deacon telling Mike to "go fuck himself." Shortly after, Deacon and Boozer left, and they were barred from returning there.

Two years after the end of civilization, Iron Mike established a fragile peace with the Rippers, but some members of his camp, especially Skizzo, were very skeptical and disapproving of this agreement.

Deacon and Boozer have been avoiding Iron Mike's Camp for over a year, doing jobs for other settlements. Eventually, after Boozer's arm is burnt and he contracts blood poisoning, Deacon is forced to take Boozer there. Initially uneasy with returning, Deacon is gradually accepted back there, as word of his good deeds has reached the safe zone. Deacon eventually tells Mike of his plan to reduce the Freaker population greatly by destroying their caves. Mike quickly warms up to Deacon's idea and they set out to find explosives across the region.

The two stop at Sherman's Camp to retrieve a map with the locations of registered TNT owners. There, Mike shows Deacon how everyone killed each other and explains how this brought about his basic belief in pacifism. After taking the map off the body of the police commissioner, the two are ambushed by Marauders and are forced to kill them all. When they return to camp, it becomes clear that Mike and Deacon have a much better understanding of each other than before.

Iron Mike cares very much for his settlement. Being a survivor of Sherman's Camp left him traumatized and guilt-ridden in which he admitted to Deacon that he often wished that he hadn't walk out the massacred town alive. The incident at Sherman's Camp made Mike to try and foster a co-operative and somewhat pacifistic mindset about in regards to other humans where possible, refusing to start a fight where possible, even being willing to give people a fair trial for their crimes. Mike's unwillingness to throw the first punch leads him to being somewhat naive, especially in regards to the Rippers, who he still believes can be reasoned with, which despite his intention has lead to members of his camp being killed. Despite not wanting to start fights, Mike is willing to take up arms against immediate threats, such as marauders in order to defend himself. He is hard-willed and courageous. 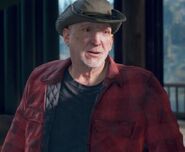 Add a photo to this gallery
Retrieved from "https://daysgone.fandom.com/wiki/%22Iron%22_Mike_Wilcox?oldid=7302"
Community content is available under CC-BY-SA unless otherwise noted.