Addison Walker is a supporting character in Days Gone. Commonly known as Addy , she is a former veterinarian who became the community doctor of Iron Mike's Camp. She is also the romantic partner of Rikki Patil.

Addy was raised from a very religious family. She came out as a lesbian in which she was subsequently ostracized by her parents, especially during a spat between them and her girlfriend while on a disastrous Thanksgiving visit. Addy would later move from Los Angeles to Oregon to go to veterinary school, where she specialized in domestic livestock.[1]

Addy at some point after the Apocalypse joined Iron Mike's settlement and became good friends with her fellow survivor and later lover, Rikki Patil. Despite being a veterinarian, Addy was the only person with a medical profession and she was obligated to become the settlement's physician. However, Addy privately believed herself being ill-suited to treat people. 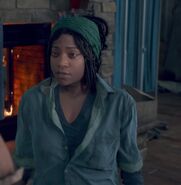 Retrieved from "https://daysgone.fandom.com/wiki/Addison_Walker?oldid=8658"
Community content is available under CC-BY-SA unless otherwise noted.