William Gray, most commonly referred to as Boozer is the deuteragonist of Days Gone. Once a Sergeant-at-Arms of the Mongrels Motorcycle Club and Deacon St. John's closest friend.

Two years later, he is now a survivor of the Freaker outbreak which has decimated the world across the Pacific Northwest. Boozer works as a mercenary alongside Deacon accepting bounties in exchange for supplies from wilderness encampments.

He is later appointed as Head of Security at Lost Lake Encampment.

Boozer was born in the late 1970's and grew up in Adrian, Oregon. As a child, his father took him elk hunting and taught him how to track wild animals from miles away. He also visited his uncle's farm located near the Idaho border. In the summers, he worked on the beef fields, and learned how to ride an old dirt bike and discovered his love of motorcycles.

In high school, Boozer met a girl named Joany where they fell in love and eventually happily married. The couple often talked about purchasing a house located near Berley Lake.

As an adult, Boozer worked as a truck driver and owned an eighteen-wheeler. He was later patched into the Mongrels Motorcycle Club, where he rose through the ranks and eventually earned the title of Sergeant-at-Arms and served as the right-hand man of the President, Jack.

He later met his fellow Enforcer member named Deacon St. John who became his closest friend and the pair came to regard each other as 'brothers'. He later befriended a newly patched member named 'Jersey' Jim.

Tragically, one night, Boozer and Joany went out for a drunken joy ride where he crashed his motorcycle off Highway 97 and Joany was killed. The MC later arrived at the scene where Deacon dragged Boozer away and they were forced to leave Joany's corpse behind and then lied to the police about the event, in order to spare Boozer a conviction for manslaughter.

Joany's death drove Boozer into a deep depression and he descended into alcoholism. Deacon found him halfway through a whiskey case, unwilling to watch his best friend commit suicide, Deacon chugged a whole bottle down and told him if he was going to drink himself to death he wouldn't be doing it alone, because that's what brothers do. Boozer was moved by his willingness to sacrifice himself for him and so he continued to live with his grief buried.

Some years later, a disgraced MC member Jessie Williamson killed another member over drugs. The MC's code stipulated that he must be stripped of his colours. Boozer alongside Deacon and Jersey Jim forcibly held him down while Jack removed his back tattoo with a blowtorch and Jessie was excommunicated from the MC.

Boozer was later introduced to Deacon's girlfriend named Sarah Whitaker, a botanist where the two became close friends and he came to regard her as a 'little sister'. Deacon later chose to become Nomad, this decision upset the majority of his brothers within the MC, apart from Boozer who remained loyal towards him.

At the wedding, hosted in Marion Forks, other than the minister, Boozer was the only individual that attended their wedding.

At the start of the outbreak, Boozer meets up with Deacon and Sarah, making his way through their town with them.

Two years after the end of society, Boozer travels with Deacon across the region, "living the dream" as post-apocalyptic bounty hunters. He and Deacon have been planning on heading North to get away from the increasing number of Freakers and the bad memories they have of the region.

After killing Leon, their bounty, and collecting evidence, the two decide to prepare on leaving in the coming days. However, Boozer briefly gets separated from Deacon and is attacked by the Rest in Peace Cult, better known as the Rippers. They torture him with a blowtorch, seriously burning the skin and muscle on his right forearm. Though the two drifters get away safely, Boozer begins to get sick, forcing Deacon to care for him.

As time goes on, Boozer's situation becomes dire, and it is discovered that he has contracted blood poisoning from his injury. Deacon, desperate to save his friend, decides to take him to the Lost Lake encampment. Deacon is still banned from entry due to how he ended relations with Iron Mike, the camp's leader. He decides to get Rikki, an old traveling companion of him and Boozer's, to take them in.

There, Boozer is given the best medicine left around, including antibiotics taken by Deacon from a crashed plane in Ripper territory. However, his condition continues to worsen, and the camp's doctor, Addison, says that they have to amputate where he was injured. After cutting off the extremity, Boozer begins to improve physically. Eventually, he contracts some form of depression over feeling useless, becoming sad when stuck at the camp and losing all sense of self-preservation when out in the wilds with Deacon. He also beats up an overly aggressive Deacon for being unable to let go of Sarah after two years. To help Boozer cope with his new reality, Deacon finds and gives Boozer a healthy puppy, which he names Jack, after their long-deceased friend.

Dealing with the Rippers

Later on, Boozer gets temporarily taken hostage during a camp raid by the Rippers. However, Deacon arrives to a standoff between "Carlos" (Deacon and Boozer's old enemy Jessie) and his Rippers, and Iron Mike and Skizzo.

Carlos is forced to let Boozer go and adhere to the treaty. Knowing that Carlos won't stop killing until he has them both, Deacon and Boozer decide to kill off the remaining Rippers. They decide to use the explosives that the camp has acquired to destroy the hydroelectric dam that the cult is based around. Boozer volunteers himself to go and plant the charges with his remaining arm while Deacon gives him cover with a sniper rifle. After planting the charges, Boozer returns to Deacon, and together they blow up the dam, destroying the Rippers' camp and killing almost all of them.

Boozer and Deacon go to confront Carlos themselves, and after fighting through most of his surviving followers, they make it into his home to kill him. However, a broken staircase prevents Boozer from going upstairs to fight Carlos with his friend, so he boosts Deacon up to the second floor. Deacon brutally fights with Carlos to the death, and manages to end him once and for all. After that, he reunites with Boozer, who wonders if the former Jessie is the only person left from their past, which Deacon decides to be the case.

When Deacon confirms that Sarah is actually alive, he goes to say farewell to Boozer, who has decided to stay at Iron Mike's Camp indefinitely with Jack. Boozer bids his old friend farewell, and Deacon leaves the valley to find Sarah.

Deacon briefly returns to the valley to get some machinery for Sarah's research from Cloverdale, her old workplace. After discovering that there are self-automated corn farms protected by an electric fence, Deacon calls Boozer to inform everyone at the camp of the resource. Deacon also tells Boozer that Sarah is alive, who in turn asks Deacon to greet her for him.

Last stand against the Militia

Later, Deacon returns to Iron Mike's Camp to fight against the Deschutes County Militia, happy to discover that the camp managed to repel the first attack. After Iron Mike's death, Deacon decides to lead the camp in an all-out assault on militia's base on Wizard Island, using a fertilizer truck bomb as a battering ram. Boozer chooses to drive the vehicle into the gates, despite Deacon's protests, as there is a high risk of death. Boozer insists on doing it, and successfully destroys the main armaments of the militia, seemingly being killed in the blast.

After the battle is over, Deacon is overjoyed to discover that Boozer jumped out of the truck at the last second, falling into the lake and barely escaping the blast unscathed. He sees Sarah for the first time in two years, and the two reunite with a hug. After the battle, Boozer settles down with Deacon and Sarah at Iron Mike's Camp, and continues to rebuild and survive with their friends and allies.

Much like Deacon, Boozer continues to wear his Mongrels MC kutte, likely as a symbol of respect for their fallen brothers and in memory of their old way of life. Boozer has a deep sense of loyalty towards his friends.

Despite the harsh reality of the post-apocalyptic world, Boozer is quick to crack jokes in order to lighten the mood, even at his own expense.

Boozer can be prone to bouts of anger leading him to act aggressively, such as when he discovered Rippers killing uninfected dogs which lead him to killing the Rippers.

Boozer is tall and has a muscular build. He is adorned with tattoos all over his body, including his head, which he keeps shave to display them. 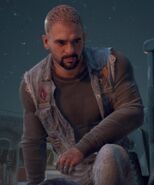 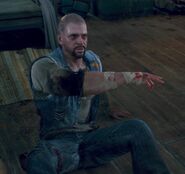 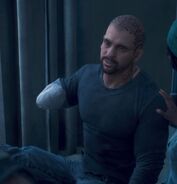 Boozer's bike
Add a photo to this gallery
Retrieved from "https://daysgone.fandom.com/wiki/Boozer?oldid=8719"
Community content is available under CC-BY-SA unless otherwise noted.