Leader of the Rippers

Jessie Williamson, also known as Carlos, is a major character and the main antagonist of the first half of Days Gone.

Renouncing his original name after the Freakers outbreak, Carlos is the leader of the Rippers, a cult that worships Freakers. An excommunicated member of the Mongrels Motorcycle Club, Carlos is a personal enemy to protagonist Deacon St. John and William "Boozer" Gray.

Before he was known as Carlos, Jessie used to know Deacon and Boozer long before the apocalypse. Jessie always held a grudge against them, as they picked on and pushed him around. His contention with his fellow bikers led to him murdering a fellow member over drugs. The club president Jack punished Jessie by painfully removing his Mongrels tattoo via welding torch while Deacon and Boozer held Jessie down, before excommunicating him from the MC. This traumatic incident led to Jessie wanting to be "free" of the scars and memories that weighed him down throughout his life. This became possible when the apocalypse began.

No longer Jessie, "Carlos" came to lead the Rippers. He came to believe that the Freakers are perfect because everything that they used to be was erased, including their pain, and wanted people to get to that point. Carlos encouraged his followers to abandon their names in order to "change". Over the course of the apocalypse, the Rippers under his leadership rose as a widely feared faction. He formed an uneasy truce with Iron Mike and his settlement. Eventually, Carlos learned that Deacon and Boozer were still alive, and has been sending his men to antagonize them for some time. Intent on turning them into Rippers, Carlos puts a bounty on their heads for their capture. Despite this, Deacon and Boozer had not known why Carlos was antagonizing them, unaware of his former identity.

Threat of the Rippers

Carlos is mentioned a number of times over the course of the story. When the wounds Boozer received from being tortured by Rippers worsen, Skizzo tells Deacon of the crash site of an airplane that was transporting medical supplies, which was located in Ripper territory. Deacon retrieves what he could from the wreckage, returns to the camp and hands them over to Addy. Addy is troubled by this and berates Deacon, saying that the plane's cargo was part of the peace treaty between the Rippers and Iron Mike's settlement, and that it was meant to be shared evenly. However, Deacon tells her that the plane had already almost been picked clean.

Skizzo betrays Deacon to the Rippers in order to take their supply of fuses to blow up the Freakers' caves. Deacon is strung up in Carlos' private chambers and realizes that he's Jessie. Carlos explains that he wants to be like the Freakers, and wants Deacon and Boozer to change with him. He begins to torture Deacon with a blowtorch, but stops, stating that Boozer should be there with them. He leaves Deacon alone, who is later freed by Lisa.

Deacon arrives back at the camp, only to discover that the Rippers have broken in and are torturing and killing people. Deacon arrives at a standoff between Rikki Patil and several Rippers who are holding Addison hostage. However, the standoff ends when a horn sounds, indicating that Carlos has made a peace treaty with Mike. Deacon goes into the lodge and threatens to kill Skizzo, though Mike has him stand down. They then force Carlos out of the camp in order to keep their treaty going. Carlos releases Boozer and tells Deacon "get low - brother." The Rippers then leave.

Deacon and Boozer decide to go after Carlos and the Rippers, using the dynamites for the cave-in project to blow up the hydroelectric dam where the cult is set up. Successfully doing so, which results in the flooding and destruction of most of the cult's territory, the two then head to Carlos' home to confront him. A broken staircase prevents Boozer from being able to go any further, but he is able to help Deacon up to where Carlos is.

Once upstairs, Carlos jumps Deacon and blows PCP in his face, impairing Deacon's senses. The two fight to the death in front of Carlos' remaining Rippers, with Deacon ultimately stabbing him in the back. Carlos collapses to the floor, accepting his fate, as Deacon slits his throat, saying "Rest in peace, Jessie." 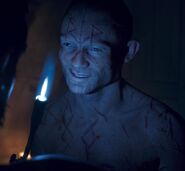 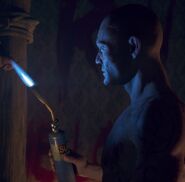 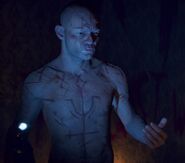 death of Carlos
Community content is available under CC-BY-SA unless otherwise noted.
Advertisement