Days Gone is an action-adventure survival horror video game developed by SIE Bend Studio and published by Sony Interactive Entertainment. It was released exclusively for the PlayStation 4 on April 26, 2019, before later being released on Microsoft Windows (PC) on May 18, 2021.

Set in a post-apocalyptic Oregon two years after a global pandemic, Days Gone follows the story of Deacon St. John, a former member of a biker gang. After discovering that there is a chance his wife Sarah is still alive, Deacon embarks on a quest to reunite with her.

Played from a third-person perspective, Days Gone is set in an open world environment which the player can explore, which includes many real life-inspired locations in Oregon including Marion Forks, Belknap Crater, and Crater Lake. Hostile encounters come from both human enemies and infected beings called the Freakers. Deacon can engage in different types of combat, including stealth and usage of firearms. A major game mechanic is Deacon's drifter bike, which is used as the player's primary mode of transportation as well as mobile inventory.

Days Gone was released to a generally mixed critical response[1]; critics praised several aspects of the open world and game mechanics as promising foundations, but had polarized thoughts on the game's narrative, pacing and mission design, while the character of Deacon was deemed as bland and underdeveloped.[2] The game was nonetheless a commercial success, having the largest physical sales launch in the United Kingdom for 2019. [3]

A global pandemic occurred which decimated the globe, turning millions of humans into feral cannibalistic creatures, called Freakers. The remnants of humanity have abandoned towns to seek refuge in the wilderness creating safe zones.

When a virus causes a large portion of humanity to become uncontrollably violent, Deacon, his wife Sarah, and his friend Boozer attempt to flee for safety. However, Sarah is stabbed and critically wounded, forcing Deacon to evacuate her on a National Emergency Restoration Organization (NERO) helicopter. However, since the helicopter does not have enough room carry all three of them, Deacon decides to stay behind with Boozer while promising Sarah he will reunite with her later.

Deacon St. John, a member of Mongrel MC, is among the survivors of the epidemic. Deacon drifts through the wasteland of the Pacific Northwest, never staying in one place for too long. Deacon often takes work as a Bounty Hunter/Mercenary, offering his services in exchange for supplies. However, Deacon learns that there is a price on his head adding to his list of enemies. Deacon and his friend Boozer plan to head north to evade some of the people who wish them dead, but their plans are put on hold when Boozer is injured and Deacon's bike is destroyed.

Two years later, civilization has collapsed and large hordes of the infected, now called "freakers", roam the landscape and are a persistent threat to surviving humans. Deacon and Boozer now work as freelance bounty hunters in what's left of Oregon, with Deacon believing Sarah is dead after finding out the NERO refugee camp she was evacuated to was overrun by freakers. Deacon and Boozer plan to head further north to find better opportunities, but Boozer has his arm badly burned by a gang of Rippers, forcing him to stay at their safehouse to recuperate and delaying their trip north. He also learns the Rippers have apparently put a price on his and Boozer's heads for unknown reasons. In addition, Deacon catches sight of NERO helicopters carrying a NERO research team several times, leading him to believe there is a chance Sarah may be alive. He manages to track down and confront one of the NERO researchers, O'Brian, who was the man who evacuated Sarah. He reveals that his helicopter was diverted to a different camp mid-flight, further suggesting Sarah may still be alive.

However, Boozer's health begins to decline rapidly from his burn wounds, forcing Deacon to take him to the Lost Lake camp for medical treatment. Unfortunately, Boozer's arm turns out to be infected, forcing the doctor to amputate it. O'Brian then contacts Deacon, requesting his help in investigating what NERO is researching in return for helping him track down Sarah. However, Deacon is disheartened to learn that even though Sarah survived her stab wound, the refugee camp she was taken to was also overrun, meaning she is still likely dead. Meanwhile, Lost Lake has an uneasy nonaggression treaty with the Rippers, held up only by Lost Lake's leader Iron Mike while his lieutenant Skizzo is skeptical of Rippers' willingness to honor the treaty. Instead, Skizzo makes a separate deal with the Rippers and turns Deacon over to them, where it is revealed that the leader of the Rippers is Jessie, an old enemy of Deacon and Boozer from before the outbreak. Deacon escapes custody and together with Boozer, drowns the Rippers by destroying the dam above their camp and kills Jessie. Skizzo is exiled from Lost Lake for his betrayal.

Later, Deacon remembers that Sarah worked a government lab and would have had federal security clearance, meaning she would have been a priority to evacuate from the camp. O'Brian confirms that Sarah was evacuated to a military outpost at Crater Lake, but the area is now under the control of the Deschutes County Militia. O'Brian also warns Deacon that NERO's research has shown that the freakers are evolving, meaning their threat will only increase as time passes. He meets the leader of the Militia, Colonel Garret, under the guise of wanting to join up. At the Militia's main stronghold, Deacon is able to reunite with Sarah, who is working with the Militia to create a bioweapon that can destroy the freakers once and for all and won't leave until it is complete. Deacon reluctantly stays with the Militia in order to help her. Deacon and Sarah decide to head to the Cloverdale lab she used to work at in order to obtain a DNA sequencer. However, upon arriving at the lab, Sarah realizes that Cloverdale used her research to develop the virus that created the freakers.

Upon returning to Sarah's lab, she reveals that she is not actually working on a bioweapon to kill the freakers, but a cure to save them. Deacon suggests that they desert the Militia and complete the cure at the Cloverdale lab, but the plan is complicated when an increasingly paranoid Colonel Garret puts Sarah under protective custody. Deacon attempts to extract Sarah, but the plan is foiled by Skizzo, who lies about Deacon's criminal past to Colonel Garret. Deacon is arrested but is freed by a sympathetic officer. He returns to Lost Lake, which has managed to repel an assault from the Militia but Iron Mike is mortally wounded. Deacon warns Lost Lake that the Militia will return in greater numbers to exterminate them all, and decides to perform a preemptive strike by destroying their headquarters with a truck bomb. Deacon then kills Spizzo and Colonel Garret, rescuing Sarah and ending the threat of the Militia for good.

Afterwards, Deacon becomes the new leader of Lost Lake, living there with Sarah, Boozer, and his friends. He is then contacted by O'Brian again, who reveals that NERO had known about the virus' mutagenic effects all along and that he himself is infected with a strain of the virus that makes him an intelligent freaker. He warns Deacon that NERO is coming and that there is nothing they can do to stop them.

The game is set in an open world and players are allowed to use multiple ways to complete objectives, such as utilizing stealth or taking the aggressive approach. Areas will apparently have different numbers of enemies, with some areas being fairly devoid of Freaker activity, while others will have swarms of hundreds of Freakers. Freakers will also become more dangerous at night. So far there are two types of Freakers confirmed, Newts and Hordes. Non-infected animals also pose a threat such as wolves and bears.

Players can carry at least two firearms at a time, or use melee weapons such as axes, though these appear to degrade and break quickly. The melee also extends to contextual environmental kills. Players also craft new items to improve combat efficiencies, such as Molotov cocktails and proximity bombs.

Deacon's motorcycle is also key to gameplay, serving not only as transportation but also as a mobile inventory to hold ammunition and supplies, which the player can access as needed. The motorcycle will be customizable, to better suit the different environments it will need to traverse. Also, next to the minimap, a small meter indicates that the bike will have a finite amount of fuel, and players will need to scavenge for more, in order to avoid being stranded.

The game also implements a dynamic weather system, with each type of weather having a different effect. Rain will cause the roads to have less traction, and reduce noise making it easier to sneak, although enemies will be able to more easily sneak up on Deacon as well, or snow, which will reduce visibility, and also give the freakers a boost in strength.

The game originally featured narrative choices, such as deciding whether or not a character should be given a mercy killing, or left for the infected to kill. These were later removed as the developers could not effectively find a way to show how these would impact the story.

Unreal Engine 4 was used for the game's development.

Days Gone was released on April 26, 2019, on PlayStation 4 and was later released on May 18, 2021 for Microsoft Windows (PC), making it the second major PlayStation exclusive to launch on PC after Horizon: Zero Dawn.

Each edition of the game may also has several bonuses available for pre-ordering the game.

Despite mixed reviews, Days Gone was a commercial success. It was the best selling video game in terms of physical copies in the United Kingdom on the week of its release.[5] As of June 2019, it was the eighth best-selling videogame of the year, and the sixth best-selling game which was released the same year.[6] 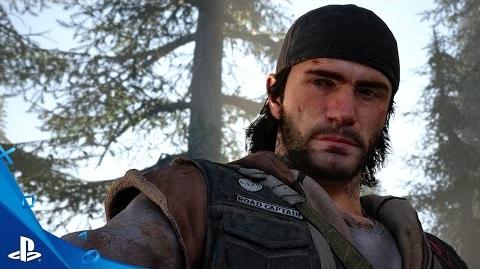 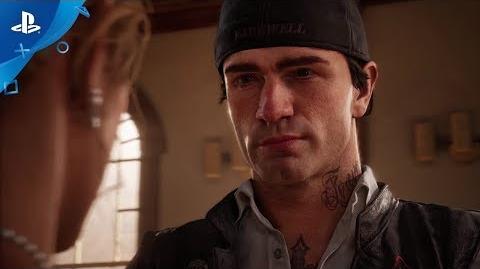 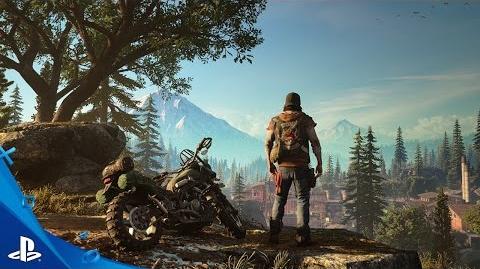 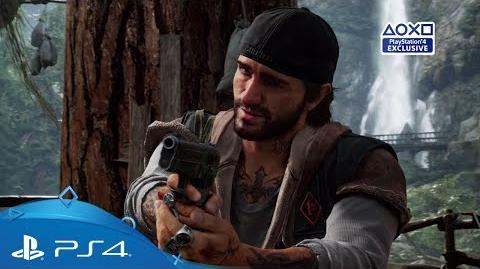 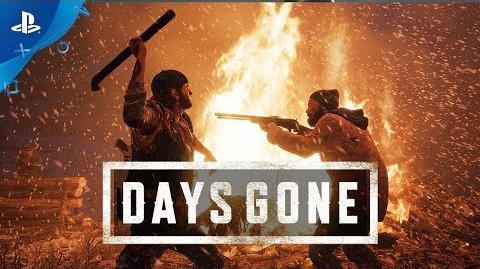 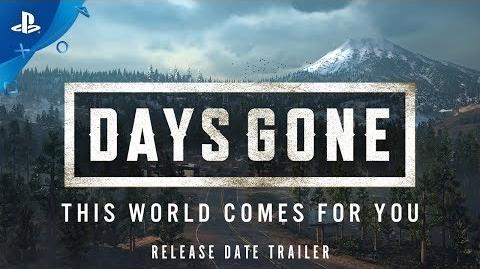 Days Gone – This World Comes For You - PS4 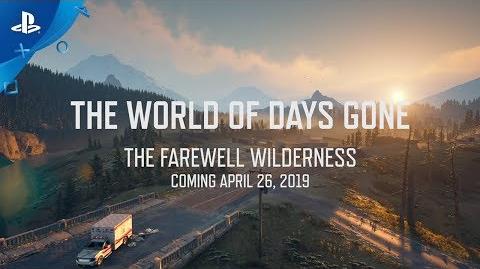 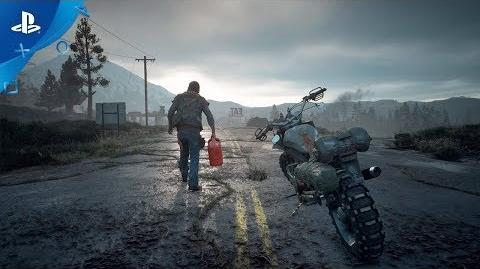 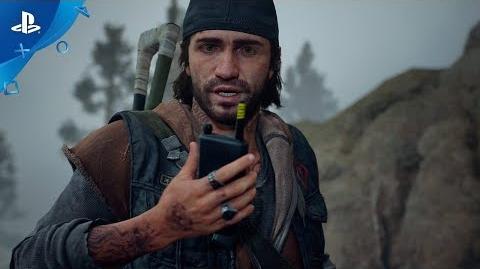 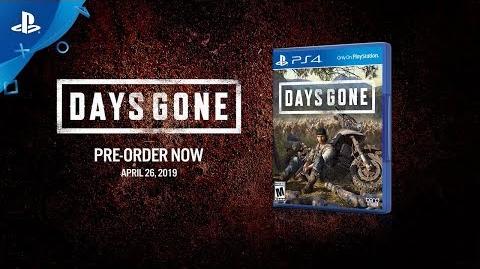 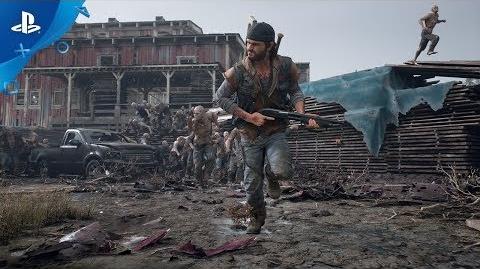