Start a Wiki
This article is a stub. You can help Days Gone Wiki by expanding it.

Derick Kouri is a major character and a mission giver featured in Days Gone.

Holding the rank of captain, Kouri is a high-ranking officer within the Deschutes County Militia, and one of Colonel Matthew Garret's most trusted men.

Long before the apocalypse, Kouri was married to a woman named Karie, who he still with right up to the Freaker outbreak. She died before the events of the game. Kouri served in the U.S. Air Force for ten years as part of the Strategic Air Command.

During the beginning of the outbreak, Kouri was on vacation in the west coast and managed to receive hourly reports from across the country before SATCOM (satellite communications) went down. He was stationed in the Silver Lake refugee camp until it was overrun, and Kouri escaped with few survivors before joining the Deschutes County Militia.

After Deacon saves two militia soldiers from a Rager Bear, one of them takes him to Kouri at their outpost. After being introduced, Deacon notices that Kouri has his ring that he gave to Sarah the last time he saw her. However, Deacon says nothing about this and remains friendly towards the captain. Deacon says that he is hoping to join the militia, which is noticeably lacking in well-disciplined soldiers.

Kouri is very impressed with Deacon's abilities and tasks him with helping him track down a rogue soldier, Vasquez. Deacon impresses Kouri with his tracking skills, in addition to recognizing Deacon as a veteran. He gives Deacon an immediate recommendation to Colonel Garret for Deacon's service. The two ride over to Crater Lake, where Garret's main forces are set up. He shares with Deacon some personal memories, which Deacon does not return. Kouri then takes him down to the base to be officially recruited. 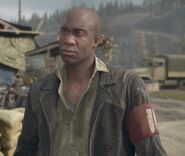 Retrieved from "https://daysgone.fandom.com/wiki/Derrick_Kouri?oldid=7000"
Community content is available under CC-BY-SA unless otherwise noted.