Gabbi Butler is a minor character featured in Days Gone. She resides within the Lost Lake encampment in Oregon, United States.

Nothing is known of Gabbi's early life, though she is the twin sister of Abigail Butler. Following the Freaker outbreak in 2017, she and her sister survived together for an unknown length of time before joining up with Iron Mike and settling in his encampment.

In 2019, Deacon St. John is approached by Rikki Patil and informed that both Abigail and Gabbi have failed to return from what was supposed to be a short fishing trip. Rikki sends Deacon to investigate the disappearance during the Gone Fishing storyline.

Deacon travels to their fishing spot along the Metolius River, but discovers evidence of that the sisters have been taken captive by marauders. He follows the tracks and comes to the conclusion that Abigail managed to stab one of her attackers before both her and her sister were dragged to a nearby cabin. Deacon manages to kill the bandits around the cabin and rescue a traumatized Gabbi. Unfortunately, Abigail was murdered by the marauders while fighting off an attempted rape.

Gabbi returns to the Lost Lake encampment on her own accord. Her fate afterwards is unknown; she may have chosen to remain at the camp and may have participated in the defense against the Deschutes County Militia. 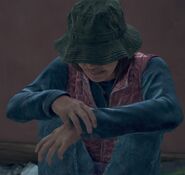 Retrieved from "https://daysgone.fandom.com/wiki/Gabbi_Butler?oldid=8250"
Community content is available under CC-BY-SA unless otherwise noted.