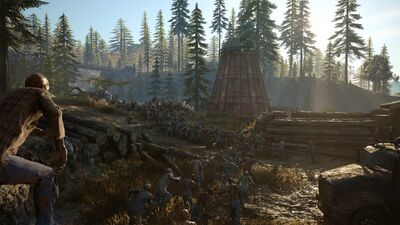 ​​​Freaker ​​​Hordes are a prominent hazard in Days Gone.

There are a total of 40 Hordes in game, each of them having multiple points they travel between.

Hordes are comprised of between 50 and 500 Swarmers. Each horde is positioned in various environments and shows slight differences between each other. They will typically hibernate somewhere dark in those environments and come out during the night.

The hordes appear to follow pheromones, left behind in trails of excrement and urine, between their points of activity. These pheromones will also attract other Swarmers to replenish their numbers, if the swarm is not left out.

While Hordes consistent entirely of Swarmers, any other mutation may wander into the mix, increasing the risk factor. For instance, if a Screamer happens to be nearby, and spots the player, they will alert the entire horde to the player, which can be fatal if the player was not aware the horde was there or was otherwise unprepared (i.e. laying traps)

They behave as a uniformed group would, doing just about everything together. This includes eating, drinking, sleeping and attacking (if provoked). Most members of a horde will be inactive during the day (unless you disturb them), usually hibernating in a cave, structure or any dark location large enough to sustain their numbers. If unprovoked or unaware of your presence, a horde will wander around its area, but it is reasonable to believe that it may move around a little in that territory. During the night is when the horde ventures out to feed, like in mass grave sites, and drink from a nearby water source. Hordes also react similarly to individual Freakers in certain weather, due to it being completely comprised of such. For example, Freakers are more dangerous in cold weather, so you could just build a fire and wait for warmer weather before you attempt to take it out.

A horde's behavioral patterns allow the player to observe it because each one is in a different environment and will act in their own way, so it is best to strategize before attempting to evade or eliminate the threat it poses. Destroying a horde will make a region or certain area of land much safer to traverse, including individual Freakers found in the area, so it is wise to eliminate them if it can be done. Though avoiding a horde is a fine option too.

Though Freakers, in general, are easy to dispatch alone or in small groups, the strength of the horde is simply in its numbers, which will overwhelm players if not prepared. However, that doesn't mean there aren't ways of wiping them out or at least lowering their numbers down.

If the terrain around each horde is investigated thoroughly, it is mentioned by some of the games representatives that there are environmental hazards that can be used to quell the raging horde (e.g explosive barrels, blockable paths, weakened structures or clever use of proximity mines).

As with all Freakers, fire is an incredibly effective method of dispatching Hordes even more so when Napalm Molotovs become craftable as they burn hotter and will spread into a much wider area due to the larger containers used in their construction.

High capacity weapons such as LMGs are very useful to picking off hordes, especially if players manage to slip through a crevice or gap that will slow the horde to make them easier to pick off.

Also of note, if the player runs out of ammunition and supplies to combat the Horde, they can flee in order to gather more supplies. The Horde will remain at the same number of remaining Freakers when the player fled and they can simply pick up from where they left off. However this is a time sensitive possibility, if too much time has passed, more Swarmers will arrive and replenish the horde.

Though tricky, Stealth may be used to pick off Hordes. If they player can remain hidden, they can use Attractors to lure enemies to an area and simply throwing explosives into the horde.

It is also possible to use the Freakers schedule to their advantage. If the player can find where the Horde hibernates (generally in caves) There are two strategies that can be utilized. If it is during the day, The Horde will be inside, engaging the horde will draw them out, if done correctly, only a few Freakers will come out at a time, making it easier to whittle down their numbers, if they are all startled and charge out, the narrowness of the caves can make it easier to sustain fire of them ensuring maximum accuracy.

At night, the Freakers will leave and the cave will be empty, and players can place remote bombs within. The player can then wait for the horde to return in the morning and then detonate all of their explosives, theoretically making it possible to wipe out the entire horde at once.

Horde wiped out by Deacon. 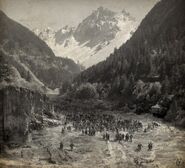 Early concept art of a Horde