Leon is a minor character featured in Days Gone.

He is a drifter with a bounty on his head who is hunted down and killed by Deacon St. John and William "Boozer" Gray during the Chasing Leon storyline.

Nothing is known of Leon's early life. Following the 2017 Freakers outbreak, he survived by drifting between established survivor camps, performing supply runs in return for food and fuel.

He was a known associate of Alvarez and Roach, and had encountered Deacon St. John and his riding partner William "Boozer" Gray on several occasions.

During the very first storyline, Chasing Leon, Deacon and Boozer are tasked with hunting down Leon on behalf of Ada Tucker, the leader of the Hot Springs survivor encampment. According to Tucker, Leon and another drifter named Alvarez teamed up to rob her of a large portion of drugs. Deacon and Boozer begin tracking the pair and eventually locate a mortally wounded Alvarez, who has been brutally beaten by Leon with a crowbar. The pair manage to locate Leon and pursue him into Pioneer Cemetery, where he is wounded by a gunshot to the stomach.

Deacon manages to convince Leon to hand over a map indicating where he stashed the drugs. He then shoots Leon in the head in order to spare him from being painfully mauled to death by Freakers. Boozer collects Leon's blood-stained baseball cap as proof of his death.

Leon is a Caucasian male between the age of 35 and 40 years old. At the time of his death in 2019, he was shown to have short brown hair and a short beard. He was wearing a vest over top of a white short-sleeved shirt as well as a camouflage baseball cap.

He has a reputation for being a known liar and thief. He teamed up with Alvarez and Roach in order to steal drugs from Tucker, only to later betray Alvarez and brutally beat her to death. When he is finally cornered by Deacon and Boozer, he begs them to kill him, only because it would spare him the fate of being mauled to death by Freakers. 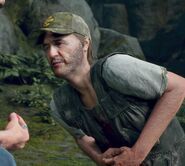 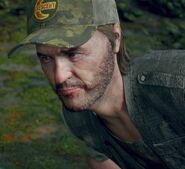 Retrieved from "https://daysgone.fandom.com/wiki/Leon?oldid=8344"
Community content is available under CC-BY-SA unless otherwise noted.