Lisa Jackson is a supporting character featured in Days Gone.

She was a teenage high school student in 2017 when the Freaker outbreak began and was immediately separated from her family. She spent the next two years surviving in Marion Forks on her own before being rescued by Deacon St. John in 2019.

Little is known of Lisa's early life. She was born sometime around 2002, likely in Oregon, and raised in the small town of Marion Forks. In 2017, when the Freaker outbreak occurred, she was a teenage student at her local high school, and became separated from her parents. She was close friends with Tommy Strickland, a fellow student and neighbor, who offered to shelter her with his parents, though Lisa refused. She managed to secure her home and survive on her own for over two years, believing her parents would one day return. She was subsequently left severely traumatized by the experience.

In 2019, as part of the storylines It's Not Safe Here and Lots of Sick People, the drifter Deacon St. John is tasked by Ada Tucker, the leader of the encampment at Hot Springs, with locating a young woman spotted surviving on her own in Marion Forks. He tracks her throughout the town, noting her cleverness for avoiding open spaces. After fighting off a group of Rippers, he finds her at her home and realizes that she is just a teenage girl who has been traumatized after several years on her own. She reluctantly agrees to come with Deacon to Hot Springs in the hope that she will be reunited with her parents. Arriving at the camp, she meets Tucker, whom she recognizes as she a former neighbor, and orders some of her men to take care of her.

Later, during the storyline They Won't Let Me Leave, Deacon returns to Hot Springs and checks on Lisa, who is unhappy with the living conditions at the camp. She complains to Deacon that Tucker won't allow her to leave the camp, leaving him confused as to why she would want to do so. Deacon and Lisa part ways after their short conversation.

During the ensuing storyline I Brought You Something, Deacon travels to the Belknap Crater visitors' center and retrieves a thunderegg, a nodule-like rock, similar to a filled geode, that is formed within rhyolitic volcanic ash layers. Lisa had mentioned that her father had collected them and she often joined him on hiking trips. Deacon returns to Hot Springs and presents her with the thunderegg in the hopes of improving her mood.

Deacon is later contacted by Tucker and informed that Lisa has gone missing during a supply run with Alkai Turner and several others. She became separated while scavenging in Marion Forks, and Deacon heads there in order to search for her. In town Deacon finds several of Turner's men dead, having been killed by Rippers, who also managed to capture Lisa and take her to a camp near Belknap Crater.

As part of the What Have They Done storyline, Deacon travels to Belknap Crater and wipes out the cultists before managing to rescue Lisa. Unfortunately, she was tortured during her brief time in captivity, leaving her with dozens of cuts all over her face, including "RIP" being carved into her forehead. Due to her recent trauma, Deacon is unwilling to return her to Hot Springs, where she is overworked and underfed. Instead, Deacon contacts Rikki Patil at the Lost Lake encampment and arranges for her to take custody of Lisa. Deacon then lies to Tucker about Jackson's fate.

Deacon and William "Boozer" Gray later arrive at Lost Lake camp to seek treatment for Boozer's badly burned arm. After Boozer's condition has stabilized, Deacon questions Rikki about Lisa's whereabouts and learns that she has once again disappeared. After being sent by Raymond "Skizzo" Sarkozi on a supply run to Rogue Camp, Lisa failed to return. As part of the Searching For Lisa storyline, Deacon travels to and searches her last known location, but finds only a letter which he believes to be in her hand-writing. Deacon concludes that the severely traumatized teenage girl likely took her own life, and so he returns to Lost Lake to deliver the news to Rikki.

During the storylines It Was The Only Way and I Kept My Name, Deacon joins Skizzo on a supply run to search for a detonation cord, but is betrayed and captured by Rippers. Skizzo believed that giving Deacon over to the Rippers would guarantee peace between the cult and the survivors at Lost Lake camp. Deacon is brought to the Rippers main encampment at Iron Butte Ranch where he is tortured by the cult's leader, Carlos, whom Deacon recognizes as Jessie Williamson, a former member of the Mongrels MC with whom he had a falling out. However, when Deacon is left alone, he is then freed by Lisa, who has joined the Rippers in an apparent attempt to cope with the trauma of having been tortured. Lisa's betrayal is discovered and Deacon must once again rescue her after recovering his belongings. However, once they are clear of the cultists, Lisa does not return to Lost Lake with Deacon and instead sets off independently.

After Lost Lake is attacked by the Deschutes County Militia, prompting a devastating counterattack with results in the militia's complete dissolution, Deacon returns to Lost Lake and assumes something of a leadership role in the community. During the I'm Not A Ripper storyline, Deacon intervenes during a stand-off between one of the camp guards and a suspected member of the Rippers cult. Deacon realizes that the drifter is in fact Lisa, who know travels on her own motorcycle hunting down Freakers and collecting bounties, much like Deacon. He directs Lisa to Joe Haslin, the camp's bounty collector, and offers her a place to stay at the camp. Lisa refuses and later sets off on her own, leaving her fate unknown.

Lisa is a Caucasian teenage girl with brown hair and brown eyes. When she is first encountered by Deacon, she is wearing a striped long-sleeved shirt underneath a dark V-neck short-sleeved shirt. She is shown to be wearing a cross necklace, possibly suggesting a religious background. During the events of Days Gone, she initially has her hair cut short. She is later tortured by the Rippers, a violent cult, leaving her with dozens of scars across her face and body. She later shaves her head, leaving herself completely bald.

When Lisa is first encountered, she is incredibly nervous after having survived with minimal human contact for over two years. She has also been severely traumatized by the experience, which included being separated from her parents. Following her rescue, her mental state does not significantly improve, and is further damaged both by her time in Tucker's camp and her capture and torture by the Rippers. Despite later settling in the Lost Lake encampment, where she is guaranteed better treatment, she finds herself unable to cope with her experiences and runs off during a supply run. She is later discovered to have joined with the Rippers, hoping to make sense of the torture inflicted upon her, but only finds herself in a position where she must once again be rescued. Following this ordeal, Lisa adopts a nomadic and solitary lifestyle as a drifter, unwilling to spend a significant amount of time in any one location or with other people.

Lisa meets with Ada Tucker after being rescued.

Lisa receives a thunderegg from Deacon.

Deacon after rescuing Lisa from the Rippers.

Lisa before rescuing Deacon from the Rippers. 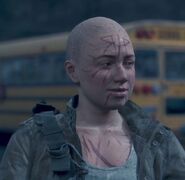 Lisa on her own at the conclusion of the game, scarred and traumatized from her time with the Rippers.
Add a photo to this gallery

Retrieved from "https://daysgone.fandom.com/wiki/Lisa_Jackson?oldid=8718"
Community content is available under CC-BY-SA unless otherwise noted.