He resides within Copeland's Camp and acts as a mechanic, selling motorcycle parts as well as providing refuel and repair services.

Manny was born in the early 1980s and grew up in Oregon. During his youth, he worked in his uncle's garage and learned how to repair vehicles. He later dropped out of high school and once participated in illegal street-racing. As an adult, he eventually opened his own mechanic shop in Farewell which specialized in fixing motorcycles.

Following the outbreak in 2017, Manny survived for an undetermined amount of time before joining up with Mark Copeland and his camp along the shore of Peaceful Lake. Within Copeland's Camp, he acts as a mechanic, selling motorcycle parts as well as providing refuel and repair services.

In 2019, Manny is brought a motorcycle to salvage for parts. Unbeknownst to him, the bike belonged to Deacon St. John, who is angered by the loss of his bike. Manny promises to rebuild it for him as he gets the parts.

At some point, Manny goes out to try and scavenge supplies and ends up being captured. He is later rescued by Deacon.

Manny is an Hispanic man in mid-to-late 30s. During the events of Days Gone, he appears with short brown hair though he always wears a red cap, and wears a grey jacket stained with oil and grease. 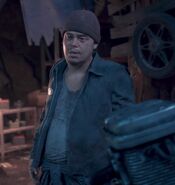 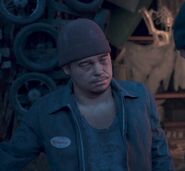 Retrieved from "https://daysgone.fandom.com/wiki/Manny_Mendez?oldid=8351"
Community content is available under CC-BY-SA unless otherwise noted.