Copeland is a survivor of the 2017 Freakers outbreak and the leader of Copeland's Camp, a faction located along the shore of Peaceful Lake, in Oregon. A conspiracy theorist with intense hatred for the American government, Copeland is one of the primary job providers for Deacon St. John.

Not much is known about Copeland's early life, except that while growing up he go out hunting with his father and they once worked together in building a fallout shelter during the Cold War. It was his father who was responsible for instilling Copeland's extreme libertarian beliefs and distrusts towards the Federal government.

Copeland served in the U.S. Marine Corps when he was younger.

At some point Copeland had a son named Christopher (nicknamed Christy) who lived outside of Oregon, but would return in hunting season to be with his father.

In the last few weeks prior to the collapse of human civilization, Copeland began his conspiracy radio show, Radio Free Oregon, which he expresses his conspiracy-fueled and political beliefs. He broadcast his show from his unmarked van, traveling from town to town before finally finding his own survivor camp.

Two years after the Freaker outbreak, Copeland still continued to run his radio show. In his radio's segments, he claims that he knew what was coming in the early days of the infection and that the government was responsible for the end of civilization, though much of what he has to say is either twisted to suit his own goals or factually wrong. Because of his out of touch mindfulness, Copeland is treated with annoyances from other survivors outside of his camp, such as Deacon St. John and Iron Mike, who called out the conspiracy theorist a "truther".

Copeland's people came across Deacon's abandoned bike and took it to their camp, with Manny stripping of its parts. Deacon eventually came to Copeland and reluctantly works for him in return for his bike. Copeland assigned Deacon in restoring the radio uplink at an old radio tower to continue broadcasting Radio Free Oregon.

If the player has reached trust level 3 in Copeland's Camp, Copeland and some of his men will come to support Deacon during the mission "You Can't Do This Alone".

Copeland believes firmly in individual freedom, not believing it's his place to tell people how to live, though he is quick to distrust people who engage in behaviours he believes abhorrent, such as collaborating with NERO, even going as far as to threaten people for these behaviours, making him something of a hypocrite.

Beneath his gruff exterior, he does care for the well being of members of his camp.

Even before the Freaker outbreak, Copeland was fond of guns and hunting, his father instilling the belief that the U.S. Constitution took precedence over the laws of the day. 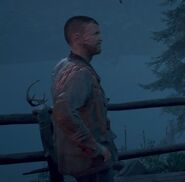 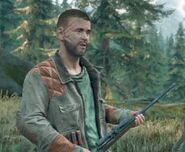