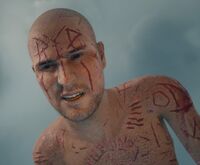 The Rest In Peace Cult, better known as Rippers, is an antagonistic faction featured in Days Gone.

They are an insane cult who worship the Freakers.

The Rest in Peace Cult; more commonly known as Rippers are a group of uninfected human enemies that worship both the Freakers and the outbreak itself, believing that to become Infected is a gift that all should strive towards becoming. They also believe that civilization and any vestiges of it are blasphemous, and thus typically torture and kill other humans they come across, especially those who refuse to join them.

From a distance, Rippers are hard to distinguish from Freakers. All members shave their heads, and ritualistically mutilate their own bodies with scars and burns adorning the acronym 'RIP' and other symbols on their bodies.

Their territory is designed to be reminiscent of a Freaker nest, with lots of jagged wood wooden pillars and sigils marking their territory. Their home territory in Iron Butte, Oregon, often referred to as "Ripper Country."

Rippers all use drugs which inhibits their bodies response to pain, allowing them to sustain more damage than the average human.

Rippers worship the Freakers, believing them to be the next step in human evolution. Not only will they not attack Freakers, they will kneel before them, sacrificing themselves so that the Freaker may eat.

The Rippers were lead by a man named Carlos, who they saw as their wise, unquestioned leader.

None of the other Rippers have names, as they have all willingly gave up their identities to become a singular entity.

Lisa was temporarily a member of the Rippers, though she had a change of heart upon finding Deacon after he was tortured by Carlos. 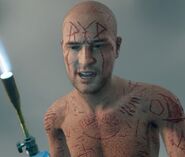 Retrieved from "https://daysgone.fandom.com/wiki/Rippers?oldid=7172"
Community content is available under CC-BY-SA unless otherwise noted.