Sarah Irene Whitaker, Ph.D is a major character and the tritagonist in Days Gone, and vital to the game's backstory.

Sarah is a research scientist and botanist, and the wife of protagonist Deacon St. John. She is presumed deceased at the dawn of the Freakers outbreak; a large part of Days Gone revolves around Deacon's search for her.

Sarah was born to a middle class family in Seattle, Washington. She grew up with her little sister, Emma, whom she was very close to.

Sarah attended college, majoring in botany. After graduating, she got a job as a researcher for the bio engineering company Cloverdale.[1] Cloverdale opened a lab in Iron Butte, Oregon, which Sarah transferred to in order to study the rare plants that grew in the area.

One day whilst heading to the lab, Sarah's car broke down. Whilst attempting to fix it, she was happened upon by biker, Deacon St. John. After some playful banter, he offered her a lift which she accepted. After nearly being hit by a pickup truck, Sarah was called by her lab, and informed them of her car breaking down. Asking for a tow truck. She and Deacon head back to her car, only to find the pickup truck that nearly hit them, the crew of which are stripping the car. While Deacon fights the crew, Sarah tries to call the police, but cannot get a signal. Looking through Deacon's saddle bag, she finds his gun, deciding to fire off a warning shot, which scares off the pickup truck's crew. Sarah begins to panic having never fired a gun before. Deacon thanks Sarah and tells her he will stay with her until the tow truck arrives.

Shortly after this, Sarah and Deacon began dating. Sarah taught Deacon about the practical applications of Botany, such as Lavender's use as a burn medicine, and Deacon taught Sarah how to ride his motorcycle. Sarah also became friends with Deacon's fellow club member, Boozer, who she formed a very close friendship with.

Sarah tried to talk to Deacon about moving in with him so they could spend more time together, however Deacon seemed reluctant to talk about it. One night, Deacon took Sarah out for a midnight stroll, through land owned by the MC, taking her to a clearing which had a waterfall. She was shocked to find Deacon was proposing to her, using his Mongrel MC ring, as an engagement ring, she agrees on several conditions, one of them being that he agrees to never leave her. She takes a moment to admire the ring, Deacon telling her that Latin saying on the ring, "Morior Invictus" which translates to "Death Before Defeat." The pair were soon interrupted by a call from Cloverdale, requesting Sarah's return.

Soon after this, Sarah gifted Deacon a custom gas tank.

At some point, Cloverdale changed Sarah's clearance for the area she worked in. David Gorman, a young research Engineer, told Sarah that Cloverdale was developing some kind of classified project. Sarah tried to convince him that he was just being paranoid and to drop it. However he didn't listen to her.

One day Sarah was heading out to meet Deacon for a break, to take a ride around the area, finding him at odds with Jim, Cloverdale's security guard. Sarah managed to defuse the situation and she and Deacon leave, with her taking control of the bike and berating Deacon for his behavior. While head riding out, the pair are nearly hit by an eighteen-wheeler. Deacon congratulates her on how well she handled the situation, but she claims she wasn't paying attention. Deacon asks if it was because of his new patch, and she finally notices he's wearing a new patch that bares the word "NOMAD", which he explains means he will be less involved in the MC. The pair head back, and Deacon explains that he hoped this would make her parents more willing to accept him, but she is unwilling to change anything to please her parents. On the way back, a police car speeds up the road, seemingly heading to Cloverdale. The pair rush back, and the security guard tells Sarah that she is needed.

The day of Deacon and Sarah's wedding arrives, taking place in Marion Forks, the only guest in attendance being Boozer. Sarah tells Deacon that, the fact no one else has turned up is a symbol of how much she means to him, and that she doesn't care that no one else came, as she would willingly give up anything for him. Deacon promises Sarah that he will always love her and never leave her. She also offers him back his Mongrels ring, on the condition that that he "promise to ride [her] as much as he rides [his] bike." Deacon is amused by this, but the already-terrified priest conducting their wedding is shocked by it. The pair share a kiss.

Some time later, Sarah went looking for Dave after someone had broken into the secure area of Cloverdale. She went to the Cloverdale office in Farewell to look for him, finding out he had been gone for two weeks. Around this time, people became infected with a viral mutagenic which caused widespread chaos, and martial law was declared. Sarah met up with Deacon, and the pair tried to escape Farewell. The pair stumbled upon a young girl in the chaos. Sarah attempted to help her, but the girl reflexively stabbed Sarah. Deacon fired a warning shot to get rid of her.

Deacon and Boozer manage to get Sarah to a N.E.R.O. helicopter, Deacon threatening one of the agents, O'Brien to get him to take them, however he only has room for two. Deacon decides to stay with Boozer, who had also been wounded, and gives Sarah his Mongrel ring, saying he wants it back. O'Brien tells Deacon they are headed to a refugee camp west of Three Finger Jack. The Helicopter leaves.

During the flight, the helicopter is made aware that the camp has been overrun, and that they are to be diverted to Silver Lake. Upon arrival, Sarah is brought to surgery. After a six hour operation, she is stabilized, eventually making a full recovery. Sarah is told that the refugee camp was overrun and everyone was dead, leadng her to believe Deacon was killed.

Sarah eventually pieced together what had happened. Dave having broken into the lab, stole a sample of what they were working on, had traveled to a conference in Portland with the intent of meeting a reporter to expose Cloverdale. Dave unknowingly being infected, passed the infection on to everyone at the conference, which caused it to spread worldwide when the conference goers went home.

Working with the Militia

Sarah was moved to a camp outside of Chemult, where she stayed until a horde moved into the area, N.E.R.O. took Sarah due to her federal clearance. Sarah ended up in a new refugee camp. After almost a year, the camp was seized by the Deschutes County Militia.

Sarah joined the Militia, hoping to do some good, specifically, hoping she could research the virus and find a cure. Enlisting however, meant she had to give up Deacon's ring, which she reluctantly agreed to. The Militia's leader, Colonel Garret, believed she was making a biological weapon capable of killing off all of the Freakers, and assigned people to requisition the supplies she would need to develop her "weapon."

Still mourning Deacon, Sarah shrugs off the advances of the men around camp such as fellow officer and competing weapon developer James Weaver, this earned her a reputation of being cold and distant among the Militia members who dubbed her "The Wizard Island Witch."

Sarah also convinced Colonel Garret to not chop down the final tree on the Militia's base, believing that at least one should be left.

For around a year, Sarah conducted tests on the Freakers, collecting blood samples in an attempt to reverse engineer the virus. Sarah's work is constantly delayed due to inefficiency of those who are retrieving the equipment she needs.

While berating a soldier who had not acquired what was on her requisition form, Garret arrives introducing her to a new recruit who he believes will be a valuable asset due to his experience, Sarah is astonished to see her husband, and thinking quickly she demands Deacon read the bottle that the previous recruit had read incorrectly. Deacon does as he's told and Sarah tells Garret that he will do after reading the ingredients correctly, Garret leaves them, and Sarah dismisses her guard. Seemingly not believing her eyes, Sarah examines Deacon, before she begins babbling hysterically about how she thought he was dead, Deacon reassures her that he is standing right in front of her and they share a kiss.

Deacon says they can leave, but Sarah refuses, saying that her work is important and that she can help. Unwilling to lose Sarah again, Deacon stays with the Militia in order to help her.

Sarah gives Deacon requisition tasks to aid her research. Although thankful for Deacon's assistance, Sarah is frustrated by the fact Deacon is running errands for her and the two barely talk, so she decides to accompany Deacon on a supply run to find a centrifuge, at Chemult Community college.

At the college, Sarah reminisces about the time she had been there previously giving a talk on careers in Biochemistry. The campus is crawling with Freakers, and the pair make their way through, After being separated, Sarah is set upon by a group of Freakers, managing to kill all of them by the time Deacon catche up to her, finding her frozen against a wall pulling the trigger on her now empty gun. They arrive at the Science Building getting in through the roof, after fighting off a small swarm of Newts. Inside, they find a group of people who had given up hope and committed suicide by ingesting Hemlock.

On their way out they are accosted by marauders, with no other choice the pair kill them all. Deacon recalls how scared Sarah had been the first time they met when she fired his gun to scare off the rednecks who were stripping her car. Sarah remarks that a lot has changed. The pair return to Wizard Island, and Deacon refuses Sarah's thanks, though she assures him that the centrifuge is important.

Sarah continues her research into the virus, though she hits a dead end, needing a DNA synthesizer to continue. Deacon arrives, and upon hearing her problem offers a possible location, her old lab at Cloverdale. Realizing Deacon knows way over the mountains, she becomes hopeful. Deacon tells her to prepare and leaves, but she stops him, kissing him before he goes.

As they're preparing to depart, the pair are approached by Colonel Garrett and Captain Kouri and Sarah explains that they are going on a supply run, praising Deacon for his efficiency in helping her. Kouri informs her about Weaver making progress with his project, but Sarah assures them that she's also making progress and will be ready to test her weapon soon.

Sarah and Deacon riding prior to the apocalypse

Deacon and Sarah meeting for the first time

Sarah looks at Deacon's Mongrels ring on her hand after accepting 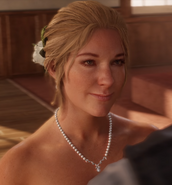 Sarah at Lost Lake following completion of the main story, post 1.60 patch
Add a photo to this gallery

Retrieved from "https://daysgone.fandom.com/wiki/Sarah_Whitaker?oldid=8716"
Community content is available under CC-BY-SA unless otherwise noted.