Raymond "Skizzo" Sarkozi is the secondary antagonist and final boss of Days Gone. He is a member of Iron Mike's Camp who works as one of the heads of security.

Skizzo was from California, either in Sacramento or Fresno. He attended college and graduated with honors. Skizzo would later lied and bragged of being a gangbanger and having smuggled drugs and guns from California to Oregon.

After the Freaker Virus decimated the world, Skizzo ended up at the Lost Lake camp lead by Iron Mike, eventually earning the role of head of security. Though he was frequently at odds with everyone else in the camp, partially due to him abusing his authority. When Iron Mike formed a treaty with the Rest In Peace cult's leader Carlos, Skizzo objected, as he considered the Rippers to be no longer human and would inevitably betray the treaty.

Skizzo was also a peeping tom, spying on Addy and Rikki as they undress. Eventually Skizzo was caught in the act while watching the women bathing, leading to Rikki threatening Skizzo from peeping on them again and becoming more confronting to the head of security.

When Deacon St. John arrived at the camp attempting to find aid for Boozer, Skizzo objected to Deacon's return, seeing Iron Mike's decision to allow him back in to the camp as weakness. Skizzo immediately began plotting to get rid of Deacon and Boozer. He convinced Deacon to go into Ripper territory to retrieve medicine from a downed plane.

When Deacon brings the idea to seal the Freaker hordes in a cave so they cannot escape or draw more to them, Skizzo accompanies Deacon to a nearby mine to acquire some explosives. After successfully retrieving the explosives, Skizzo tries to reason with Deacon that Iron Mike is not the right to lead, as the Rippers will never stick to any treaty, seeking the position of leadership himself. Deacon refuses on the grounds that he doesn't want to backstab Iron Mike.

After Deacon and Rikki restored power to Lost Lake, Skizzo spied on Deacon in the infirmary where he is being treated for a wound Deacon had sustained. Skizzo spotted Deacon's Mongrel tattoo on his back before leaving the scene. Due to Deacon's actions that had antagonized the Rippers, Iron Mike sent Skizzo to parley with Carlos. It was then that Skizzo learned that Carlos wanted both Deacon and Boozer. Skizzo offered Carlos a deal: in exchange for Deacon and Boozer, Lost Lake would be left alone.

Skizzo convinced Deacon to return to Ripper country in order to find some detonation cable for the explosives they had earlier retrieved, with intent of sealing a Freaker den. He went with Deacon into the heart of Ripper country where he knocked him out after they had retrieved the detonation cable. Skizzo handed Deacon over to Carlos and returned to Lost Lake with Carlos and a battalion of Rippers.

The Rippers launched an assault on Lost Lake and killing several residents, which Skizzo hadn't anticipated. Finding Boozer, Skizzo and Carlos headed to Iron Mike to negotiate the Rippers retreat in exchange for Boozer. However Deacon arrived and revealed Skizzo's betrayal to Iron Mike. Iron Mike ordered Carlos and the Rippers to leave at gunpoint, without Boozer or Deacon. Skizzo was then punched out by Iron Mike and placed on lockup to await a fair trial.

While Skizzo was locked up, Iron Mike confronted him. Knowing that Skizzo will never be granted a fair trial, and out of pity, Iron Mike released Skizzo, telling him to leave and never come back.

Skizzo ended up drifting, eventually heading south, where he made contact with the Deschutes County Militia. He decided to enlist, hoping to have a degree of safety. During his initiation he is shown around the settlement by Colonel Garret until Skizzo was surprised to come face-to-face with Deacon, who was trying to escape with Sarah. Skizzo accused Deacon of being a traitor and engaged in a scuffle with him until they are both detained for questioning by Garret. Skizzo lied to Garret that Deacon had previously attacked a woman while drunk at Lost Lake, claiming that it was at this time that he'd seen the Mongrel tattoo on his back. Deacon was then forced to reveal his tattoo and thus "validating" Skizzo's words, leading to Garret to side with Skizzo.

After Deacon was taken away to be hang for his treachery, Skizzo quickly became Garret's confidant and told him about Lost Lake. After which the Militia cleared a tunnel that allowed them a quick way to Lost Lake, with Skizzo leading a squad of soldiers to the settlement which he claimed to wish to see Iron Mike to make amends and offering the survivors food. Instead, the Militia opened fired on the survivors, and Skizzo fatally shot Iron Mike. Skizzo then attempted to find Boozer, but only to be forced to retreat after the Lost Lake survivors managed to fight back.

Upon returning to Wizard Island, Skizzo learned about Captain Kouri and a group of soldiers had went AWOL, freeing Deacon in the process. When Colonel Garrett attempted to take out his anger on Sarah, Skizzo prevented that and reasoned with him that Sarah's skills is invaluable and should used her to making hemlock that will be use to exterminate the other survivor settlements. Garrett was pleased by Skizzo's advice and had him promoted to Captain as Kouri's replacement, and assigned to guarding Sarah, which Skizzo later calls Deacon to goad him about.

Inevitably, the Militia's base of operations is soon attacked by the settlers of Lost Lake and their allies. Skizzo oversees the operation to seal the ark; however, Lieutenant Weaver refuses to give him the detonator, while threatening him at knife point. Skizzo is suddenly shot by Deacon, causing him to flee, sending a group of soldiers in after Deacon, who managed to dispatch them. Skizzo later ambushed Deacon, knocking him off his feet by shooting a barrel full of explosives; however, Deacon managed to get close enough and the two begin to brawl, with Deacon emerging victorious, forcing Skizzo to stab himself with his own knife. As Skizzo lays bleeding, Deacon tells him there was a point he would have left Skizzo to the Freakers, because they'd tear him apart, but they wouldn't enjoy it, before cutting Skizzo's throat.

Skizzo is often rude, antagonistic, and bitter towards other people. He proclaims his dedication to the camp constantly, though it becomes very clear that his real goal is self-preservation. He is very open about his disapproval with the truce formed by Iron Mike and Carlos, the leader of the Rippers.

Skizzo is also apparently very perverted as Rikki claims she caught him spying on her and Addy while they were getting intimate. 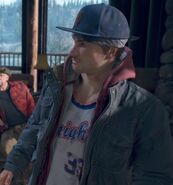 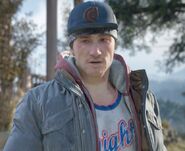 Add a photo to this gallery
Retrieved from "https://daysgone.fandom.com/wiki/Skizzo?oldid=7823"
Community content is available under CC-BY-SA unless otherwise noted.