Wade Taylor is a supporting character and a minor mission giver featured in Days Gone.

What is known about Wade Taylor's early life is that he learned how to shoot when he went out hunting with his father near Klamath Falls. At some later point in his life, Taylor developed a drug problem.

Taylor managed to survive the initial chaos of the Freaker apocalypse, drifting for around two years.

Taylor eventually arrived in the territory of the Deschutes County Militia, deciding to join up for the possibility of relative safety and a chance to get drugs.

Around this time, Deacon St. John's arrived. When Deacon asked Taylor on the whereabouts of Sarah Whitaker, Taylor was unhelpful and makes a crack on Deacon's last name and making lewd remarks on Sarah's photograph, much to Deacon's silent disapproval. He swore into the Militia at the same time as Deacon.

Taylor frequently conversed with Deacon via radio, admitting he was having second thoughts about enlisting in the Militia, and that he'd previously found a ski lodge which he thought would be a good place to hold up if he ever decided to go AWOL.

Taylor alerts Deacon about a man he's tracking, eventually calling to ask for back up and managing to give Deacon his location, moments before he is discovered and captured. He is tortured by his captors who go as far as to slice off one of his ears. Deacon arrives and dispatches the drifters and rescues Taylor before calling for someone to come get him.

Upon returning to Wizard Island, Taylor is treated for his injuries by Doc Jimenez and then reassigned to guard duty at the Infirmary by Captain Kouri. He makes banter with Deacon when he comes to visit Jimenez, seeming in high spirits, even joking about losing his ear; he partially attributes this to the drugs the Doc had given him.

Seeking more drugs, Taylor goes into the Infirmary to steal some. However, he is caught by Jimenez who tries to stop him, leading to a fight in which Taylor inadvertently kills Jimenez. Horrified by what he's done, Taylor steals the rest of the drugs and flees Wizard Island.

Taylor heads to the Ski Lodge he mentioned to Deacon, only to be ambushed and captured by marauders. He manages to kill their leader who was questioning him. Deacon arrives, having dispatched the rest of the marauders. Taylor tearfully admits to Deacon that he had not meant to kill JImenez and that it had been a mistake. He breaks down telling Deacon he doesn't want to be hang.

With the Militia arriving, Deacon takes pity on Taylor, administering a fatal overdose, giving Taylor a relatively more peaceful death. Shortly after, Kouri arrived and had Taylor's body burned with the other Marauders.

Taylor was a friendly, awkward and somewhat oblivious man. He makes small talk with anyone who will listen. He was also very loyal, refusing to give up the Militia even under threat of torture.

Taylor is unfortunately plagued by his drug addiction which leads to him making the rash decision of raiding the infirmary, ultimately leading to his death. 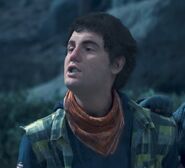 Add a photo to this gallery
Retrieved from "https://daysgone.fandom.com/wiki/Wade_Taylor?oldid=8021"
Community content is available under CC-BY-SA unless otherwise noted.